Written for the 30-day creative writing challenge hosted by Nicky and Mike of We Work For Cheese.  Today's prompt is Hanging out in the cemetery.  This is the 16th day of this challenge, and we've passed the halfway point.  Check out the Linky at WWFC for more telling tales from those still hanging around. 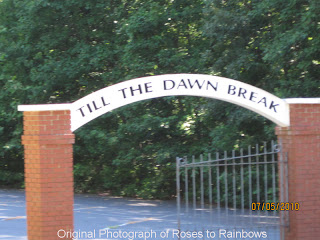 OK, now not only do we have to write about cemeteries, but about hanging out in them.  Over the years I have come to terms with cemeteries and their necessity. Cemeteries are both a part of life and death.

There was a time, however, when I studiously avoided anything to do with them.  During my teen years, my parents bought plots from a nearby cemetery that was just being developed.  It is a perpetual care cemetery which means a fund has been established for the continued maintenance of the property.  Many of the cemeteries are not allowed to have headstones, but have flat markers instead which give the cemetery a uniform look.

Getting back to the point, I thought it was morbid to even talk about cemeteries, much less buy plots, vaults, markers, and all the other things that go along with the process.  To talk about it went way beyond my coping ability.  I couldn't bear to think of my parents' passing from this life.  At that age it was a lot to comprehend, and being as close as were, it would have been devastating to me.

They, on the other hand, saw it as practical and economical.  They were right considering all those necessities cost about twice the price when purchased "at need".

Daddy would refer to their plots as the "little red-top house".  Honestly, I have no idea where this came from.  Any mention of the great beyond was known as going to the little red-top house.  Before that he called it "the happy hunting ground".  No, there is no Native American ancestry on my father's side that I know of.  It's just what he said. 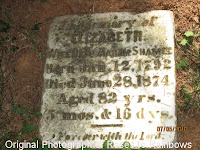 Mom liked to go visit the cemetery where her relatives were buried...I thought it was creepy, almost like it was tempting fate just to be there.

Now that both my parents have moved to the "little red-top" house, I no longer find it creepy.  I still don't go very often, but with age comes a bit of understanding, and now I know what they did back then, they did not only for themselves, but for me as well.  Bless them for having made their plans years before they needed them.  By the way, they bought 4 plots.  I guess they really were planning ahead.

Now I neither like nor dislike cemeteries, but I seldom hang out there.  Ironically, I did work in the cemetery office for about a year...up until they made plans to move the office to the actual cemetery grounds.

Email ThisBlogThis!Share to TwitterShare to FacebookShare to Pinterest
Labels: 30 Days of Writing, Pictures