This is Day 2 of the 2017 edition of the 20 Days of Chill writing challenge hosted by P. J. at A ‘lil HooHaa. Today's prompt is Little Red Wagon. Please visit the other participants for more stories.


Every kid had a little red wagon, didn't they?

Not only did I have one, I had two. The first was sized for a toddler and I would haul things around in it, probably toys or stuffed animals, or maybe books because Mom said I would carry my books around all the time. While not having a lot of real memories at that age, this is what I expect I did with it. Perhaps I was even pulled around the driveway along with my animals.

When I got too old for that, then I got my big-girl wagon similar to the one in the picture. Just like with my sled, (read that story here), Daddy would hook my wagon up behind the lawn mower and away we would ride. It wasn't too many years before I gave up riding the wagon for riding the mower but that's another story. Needless to say, those were some great Daddy-Daughter moments. 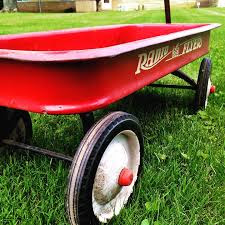 If you enjoyed this post, please leave your calling card in the comment section or click the visitors box below to let me know you stopped by.
Posted by Linda at 9:07 AM 10 comments:

Email ThisBlogThis!Share to TwitterShare to FacebookShare to Pinterest
Labels: 20 Days of Chill 2017 edition, Looking Back

Not Just Another Teddy

Did you ever have a favorite teddy bear that you liked to sleep with as a child?  Those were the days, right?  Safe and comfortable and taken care of.  And then you grow up and leaving behind the safety and comfort of childhood.  That's what I thought and then... I was about 22 and had moved into my first apartment with my best friend from high school.  I won't dwell on how much of a mistake that was, but I moved out five months later. 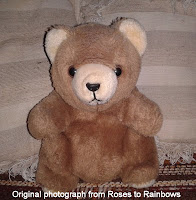 In the meantime, I went to work every day and my roommate worked the night shift.  I was usually up until she left for work and gone before she got home in the morning.  Not enough sleep and poor eating habits led to my getting sick twice that summer.  Both times I was diagnosed with strep throat and both times I had different symptoms.  Let me just say that I went to what would today be referred to as "an old country doctor".  He had probably practiced in that same tiny little office for at least 40 years.

He didn't do any tests or cultures.  You're supposed to get a culture for strep, right?  Nope!  The first time I just had a sore throat and otherwise didn't feel all that bad.  The next time my glands were swollen, and I had a fever - for a solid week.  I took antibiotics and aspirin around the clock for a solid week.

Did I mention that my parents were on vacation a thousand miles away?  Or that my roommate had absolutely no sympathy for my situation?  "Aren't you going to work" she asked?  Duh!  I'm sick!  What do you think?

I began staying at my parents house even though they weren't there.  I drew comfort from just being home.  They were due back at the end of the week and I was literally counting the days.  I suppose you are wondering where teddy bears come into the picture.

I was there when they got home, and the first thing Mom did was hand me a teddy bear.  I instantly felt 100% better.  My fever went down and I felt better than I had over in a week.  It did go back up that evening, but I was so much better.  I slept with that teddy bear for a very long time after that, and I still have him.

Email ThisBlogThis!Share to TwitterShare to FacebookShare to Pinterest
Labels: Looking Back, Miscellaneous, Pictures

I have boxes full of pictures taken before we had a digital camera, so why not take advantage of the wealth.  Looking back to early 2001, we see Dood in an over-sized kennel.
When Dood (short for Doodle) was just a baby, he lost his mama and was adopted by Red, an old Tom.  Dood, like most kittens, loved to explore and apparently found his way under the hood of a car.  Regrettably his tail was injured when the car was started.

He was friendly, but skittish about being picked up, so we worked with him to gain his trust. The smaller carrier on the left is how we rounded him up for a trip to the vet.  I left it open and he wandered in and I closed the door behind him.  Uh, what now?  Take him to vet, of course.  What?  Here was this never before contained kitten, that I had to single-handedly take to the vet.  This isn't what we'd planned...it just happened.  So, looking somewhat like a wild thing myself, I grabbed my keys and away we went.

I was trying to keep him and me calm - singing, praying, and all the while figuring he would never trust me again.  I had called hubby and he called the vet to tell them we were coming, and that I'd probably need a sedative (no, unfortunately they can't give people sedatives).

Sadly, he had to have part of his tail amputated, and while he was there we had him neutered, too.  We borrowed the large dog kennel from the Humane Society, and turned it into a mini suite, complete with a loft perch for him to enjoy while he convalesced.  His 10-day confinement allowed us to give his medication on schedule.  Like any good friend, Red was never far away, so we provided him a comfortable place to visit.

Here they are several years later in their "summer house".  They were the best of friends for years.