This is Day 15 of the 2018 edition of the 20 Days of Chill writing challenge hosted by P. J. at A ‘lil HooHaa. Please join us this month on our writing journey. Today's prompt is Why Ask Why?

My first thought on why ask why was - why not? If you don't ask, you will never know. Not that everyone would be forthcoming with an answer. 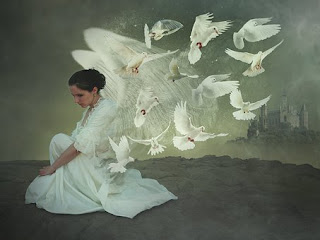 For instance, my friend Eli, (remember him?) has this strange habit of disappearing into thin air. You read that right. He just spontaneously becomes invisible. Now if you were to ask him why he was there one minute and invisible the next, what do you think he would say? "Uh...I'll have to get back to you on that."

Eli seeks out the only person who can answer him when he asks WHY?

"Why did I suddenly become invisible? I had to leave Paul to face that madman at the bar, not that he didn't deserve it–why can't he keep his mouth shut? Plus I had to walk home because an invisible man can't drive," Eli exploded at his mother, who was fortunately in her human state, as Eli would have felt even more ridiculous having this conversation with a bird.

"Can you tell me why, and then maybe how? I need to know. I can't risk randomly disappearing in public like that. Imagine what my boss would say."

"Take a breath," said his mother calmly, "and I'll try to explain. You've always know that you...that we...were different. I had hoped my stories and your dreams would prepare you."

"For what?" Eli asked skeptically.

"For your new powers," she stated, as if that were sufficient explanation.

"I'd say that the preparation was seriously lacking," responded Eli sarcastically. "I had no idea beyond the fact that my mother is a part-time bird princess."

She sighed, "You are inherently magical, as am I. Back at the bar when you wished you were invisible, you became invisible. It was a fear response. You feared for Paul, and for yourself. Each time you wished you were invisible, the power built until you ceased to be seen. In the beginning, our powers are a response to an intense feeling, and difficult to control," she explained.  "I know it was a shock, and I wish you could have known what was happening."

"In time, you gain control of your power and make it work for you. I do not know why you have been given the power of invisibility, but I'm sure there is a reason. Perhaps there is something new on the horizon for you. Another thing you should know is that your powers grow, or advance, with time, and as you master one power, another will begin to appear.

"Any more questions?" She asked.

"What other powers are there? Will I suddenly find myself leaping tall buildings, stopping locomotives? What am I...like Superman?"


The previous adventures of Eli:
Birdman

The Princess
Eli and the Redhead
The Winged Woman
Meet Eli’s Mother
Eli, Where Are You?
Can You See Me Now?


If you enjoyed this post, please leave a comment. I would love to hear your thoughts.
Posted by Linda at 1:42 PM