The world is a book, and those who do not travel read only a page. - St. Augustine

St. Augustine is the nation's oldest city, founded by the Spanish in 1565, and named after the Catholic saint, St. Augustine. Don Pedro Menendez de Aviles named the area thusly since land was sighted on the day of the feast celebrating St. Augustine.

Our destination.
It had been many years since I had been to St. Augustine, and then we were merely passing through on our way to Daytona. I was pretty excited to get to spend time exploring the city and basking on the beach...well I don't actually bask anymore, but still it was great to hang out and watch the waves. 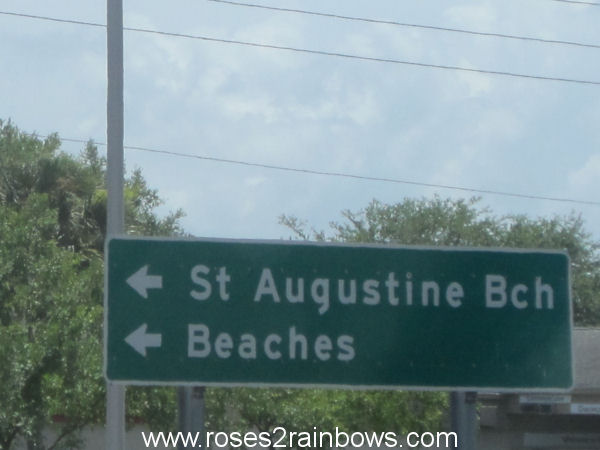 Our traveling companions, with my hubby in the back.
Everything in Twos - two couples, two cars, two kids (theirs) and two condos. Ashley and I had been looking forward to the day when we could all vacation together. This year it became a reality.

Where we stayed.
Pier Point South Condos at St. Augustine Beach on Anastasia Island. Our unit came with everything we needed, including beach towels and chairs. A big thank you to the thoughtful owners for such a well-provisioned condo.


What we did.
We struggled with high temperatures and high humidity so to see more of the city with less effort, we took the Old Town Trolley tour. You paid one price for three days of rides, getting on and off as much as you like. Our first stop was the St. Augustine Distillery. We all agreed that a tour, free tasting and A/C would be a welcome break from the heat.

After a brief tour of the distillery, we were taken to the tasting room. There we were treated to a Florida Mule made from their own vodka, and their version of a gin and tonic, again made from their gin. Everyone was offered a sample of both the gin and vodka neat. This was my first distillery tour and spirits tasting.


On another day we toured the San Sebastian Winery. We arrived in time for the tasting that was just starting. We were given our choice of two wines on each round and we decided I would take one and hubby the other so we could both taste each wine. The first two were a dry white made from several of Florida's hybrid grapes and a dry red described as full-bodied, but I felt it was rather light. These were the driest of the wines offered. There were several made from their Native Muscadine grape, which were sweeter. Lastly we were served cream sherry and port styled wines.


We climbed the St. Augustine lighthouse which is 165 feet tall with 219 steps to reach the circular walkway around the tower just below the lens. This tower was constructed in 1874 and was automated in 1955.

The view from the top was fantastic in all directions from the Atlantic to historical St. Augustine.

No trip involving water would be complete without a boat ride. We cruised the scenic waterways of St. Augustine aboard the Victory III. Visitors have been cruising these waters since the early 1900s seeing such sights as the Bridge of Lions and the St. Augustine Lighthouse.


Where we ate.
A unanimous favorite was the Conch House restaurant. Fish tacos, fish and grits, blackened Wahoo and fried shrimp were among some of the entrees we ordered. We also sampled conch fritters, gator bites and hot wings. We sat at large picnic tables beneath thatched huts overlooking the marina. As we enjoyed our lunch, we watched wading birds fishing for theirs.

The Sunset Grille, about a block from our condo, served up tasty fare as well. We shared fish sandwiches and fish and chips outside on several evenings.

Other places we ate at along the beach were Antonio's for pizza, Rita's for Italian ice (the mango was delicious), The Salt Life, and Little Margie's. In town we had breakfast at The Bunnery, and lunch at the Ice Plant (next to the distillery).

Stay tuned for my manatee adventure!

No time to comment? Please click the visitors box below to let me know you stopped by.
Posted by Linda at 11:06 AM

Email ThisBlogThis!Share to TwitterShare to FacebookShare to Pinterest
Labels: Florida, Pictures, Quote of the week, Travel