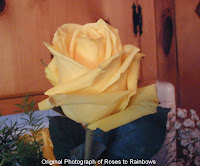 One night as Gerald sat on the porch watching the sun set over the garden, he paused to take note of how well the yellow roses were doing.  He had taken quite well to the slower paced life here in Louisiana.  He'd gotten on with a design firm in New Orleans and worked most days from his virtual office.  On evenings like this he would sit and tell his mother all about his life and his latest project on the house.  Of course, had anyone seen and heard the conversation, they would say "poor Gerald, talking to himself again."

But tonight was special, and even though Gerald wasn't so sure people were wrong, he still spoke.  "Mama, I've got great news.  I've met someone.  Her name is Allison.  She's the most wonderful girl...and Gerald continued on, his words tumbling one over the other in his excitement, nearly forgetting he was alone on the porch.  He concluded by saying "you will love her, I know you will!"

As he got up to go in for the night he said, I'll bring her around soon.  I can't wait for you to see her."  Indeed folks would think him a might touched in the head.  But they didn't know what he knew, what he thought he had seen and heard.

The house and gardens had been completed and restored to their former beauty.  All but the old brick walkway...Gerald remembered the words whispered on the wind.  He had also kept the renovations true to the era of the house.  Later that week he would plan a picnic dinner in the garden for Allison.  He felt sure his mother would be there.  She still loved her roses.

Gerald had decided that informal was the best thing for dinner in the garden, so he set the table with some attractive floral plates, tumblers filled with sweet iced tea, and of course, a fresh bouquet of roses.  The main course was a traditional Cajun jambalaya with homemade cornbread with creamy butter, and Beignets for dessert.

Soon Allison arrived in her white BMW convertible.  It was a beautiful day for a drive with the top down.  Her heels clicked as she walked along the brick walkway to the garden; her pale blue dress matched her blond hair and deep blue eyes and swayed gently as she approached.  Gerald watched, his eyes twinkling at the sight of her.

"Hi Gerry, I hope I'm not late."  Her soft Southern accent was music to his ears.

"Allison, you look lovely today, and of course you are right on time.  Please, come have a seat."

After enjoying the dinner and some quiet conversation, they strolled around the garden, and Gerald pointed out some of the different roses and where they came from.  The garden had always been his Mother's passion, so that is where he began the restoration.  They paused at the yellow rose bush, and he explained that his Father had given it to her the year before he died, and that it was her most prized bush.   A sad smile briefly touched her lips.  "Oh Gerry, that is so sweet.  They obviously adored one another."

As they returned to the table for dessert, there across Allison's plate was a single yellow rose.