In Honor of a Principled Man 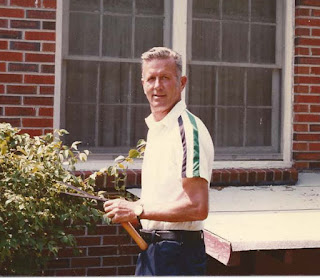 Today's post honors another of the great men in my life, my father-in-law.  It was with much sadness that we said goodbye to him just before Christmas.

My father-in-law, like many men of his generation, was a true gentleman.  He drew people to him with his kindness.  He respected everyone, in all walks of life, with "yes sir", or "no ma'am".  He led by example, and inspired those around him to become better people.  His sons will tell you that there was no finer role model than their father.
He had a remarkable memory, which was most evident when he met someone new.  He would ask their name, where they were from, etc.  When he next saw them, he would call them by name and ask how so-and-so was back home.  That made everyone feel special.
He was an avid golfer and had been since his college days.  It was often (and incorrectly) assumed he was on the golf team, but he would correct that misconception, stating that he played WITH the golf team.  This demonstrates the honesty and integrity with which he lived his life.

There was a message left on my answering machine from a college friend of his with whom he had played golf.  He told of them playing 9 holes of golf in 45 minutes (they wanted to get a round in between classes).  He also said "he was a principled man and all around good guy".

Even though he wasn't part of his college golf team, he was an excellent golfer and won numerous trophies, held a lifetime membership at his golf club, and won the club championship several times.

He served his country in the US Navy during World War II, and later worked as a traveling auditor for the railroad - golf clubs in tow, of course.
He lived a very full 85 years, and bore the discomforts of surgeries and illness with the same great humor that made his eyes twinkle when he told stories of his grandchildren.

He was a wonderful husband, father, grandfather, father-in-law and friend to many.  While he enjoyed pastimes such as Scrabble and the NY Times crosswords, two of the greatest pleasures in his life were his family and golf.
Indeed, he enriched everyone's lives, and will be greatly missed.
Posted by Linda at 1:01 PM