More Snow in the South

It's always news when snow hits the South.  Whether we get a lot or a little, the effects are usually the same.  Schools close, businesses open late, church services aren't held, and there are a bunch of wrecks.  While all that is the same time after time, the sights to behold are as different as the snowflakes themselves. 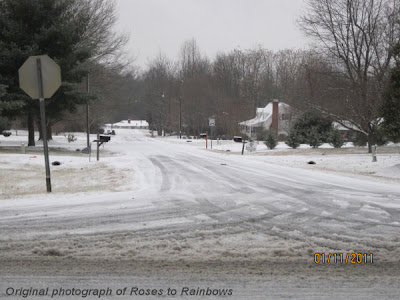 This is what our street looked like when I went out for the paper.  Our paper carriers, bless their hearts, are dedicated to service.  I shudder to think of all they have to deal with just to deliver our morning newspaper each day.

We went for a short walk yesterday, about an hour before dark, to snap a few pictures of our latest snow event.  This was one of the "little" ones, only measuring an inch, so landscape photos were not so special. 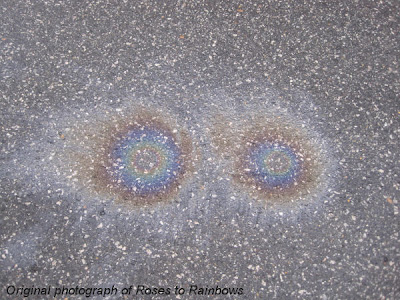 However Man and Nature joined forces to make these interesting spots on the pavement.  I'd seen an oil delivery truck in the neighborhood earlier, and wondered if it had a leak.  The oil, mixed with the melting snow, created a rainbow effect on the street.  Don't they look like eyes?

This neighborhood has a number of small lakes or ponds, and was actually named for one of the lakes.  That lake, though, has long since been drained and houses built in it's place.  Bummer, I know. 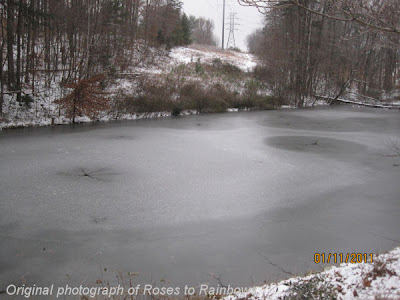 Anyway here is one of the larger lakes, and Mother Nature made some interesting designs in the ice.  There are round patches where the ice looks thinner and appears to be cracking from the center outward.  I think maybe these lakes are fed from underground springs, and maybe the comparatively warmer water is causing these spots.  Anyone have an idea? 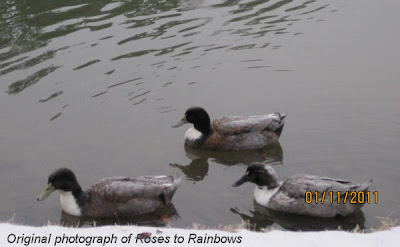 On another lake, three ducks were swimming on the unfrozen part of the lake.  The overflow runs down a large cement pipe at the edge of the lake, which you'll see in the next picture. 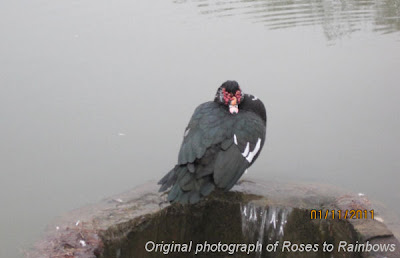 Here is an interesting fellow.  I don't know what kind of duck he is, but he didn't seem to mind me snapping a few shots.  In this one he even turned to look over his back at me...or maybe he was just settling down for a nap.  Notice the water running over the pipe.

At this point my hands were numb, the light was fading and it was time to head home and make dinner.
Posted by Linda at 4:05 PM