The Wisdom of the Doughnut 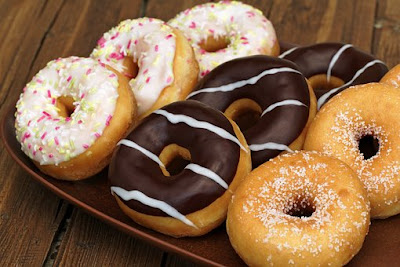 Did you know that you can find wisdom in the oddest of places? Well you can, and this has been around for over 100 years. It was written back in 1904 as this poem which first appeared in a New York newspaper.


Twixt optimist and pessimist
The difference is droll;
The optimist the doughnut sees -
The pessimist the hole

In 1929 a restaurant in Charleston, West Virginia rewrote it in a more contemporary style with a target audience of coffee drinkers...who often ate doughnuts (also called sinkers).

As you ramble through Life, Brother,
Whatever be your goal.
Keep your eye upon the doughnut,
And not upon the hole


This though-provoking poem is often known as the optimist's creed. It is a wonderful life motto which even inspired two presidential candidates who worked it into their campaign speeches. It was also adopted by the Mayflower Doughnut shop chain and appeared on their doughnut boxes. It had a picture depicting two court jesters, one staring contentedly at a fat doughnut with a small hole, and the other looking dejectedly at a skinny doughnut with a large hole.

This was presented during the "time for children" segment at church one Sunday like this:


As you go through life make this your goal.
Keep your eye on the doughnut and not the hole.

During this holiday season and throughout the year, let's be thankful for the doughnut and not worry about the hole.

If you enjoyed this post, please leave a comment. I would love to hear your thoughts.
Posted by Linda at 9:00 AM