He was a wise man who invented beer. - Plato 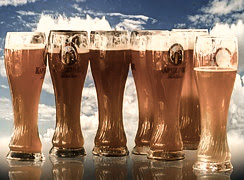 Now Plato lived some 2,300 years ago in fourth century B.C. and beer had already been around for a long time.

Tests performed on ancient pottery from Mesopotamia (modern day Iraq and parts of Iran, Syria and Turkey), indicate that beer was produced there some 7,000 years ago, and a 3,900 year old poem contains the oldest known recipe for beer.

The process of making beer was passed along to the Greeks who then taught the Romans. Beer was important to the early Romans, but was eventually replaced by wine as the alcoholic beverage of choice, rendering beer at that time, fit only for barbarians. Obviously this opinion didn't hold for long as beer brewing has continued throughout the centuries and in many cultures.

If you doubt the historical importance of beer, consider that the desire to make beer led people to give up a nomadic lifestyle to form villages, cultivate crops and develop agriculture, thus leading to civilization.

What started small thousands of years ago, rose to a multi-million dollar industry and mass production, is now returning to it's roots with this new concept of microbreweries and craft beers.

Last night we met up with some friends at the tasting room of a local brewery. They have lots of different beers on tap, some with exotic names and flavors. However I chose Carolina Blonde, a cream ale, which is lower on the bitterness scale. It is light, smooth and refreshing, especially on a hot summer evening.

If you enjoyed this post, please leave your calling card in the comment section or click the visitors box below to let me know you stopped by.
Posted by Linda at 10:02 AM