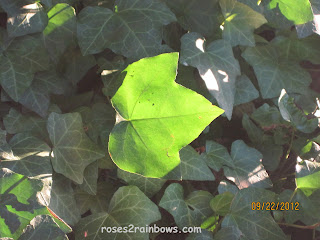 The late afternoon sun perfectly illuminated this ivy leaf.  In thinking about this picture and the story it could tell, I remembered this little ditty from my childhood.

And that prompted me to look deeper into this silly song.  It was written back in 1943 by Milton Drake, Al Hoffman and Jerry Livingston, based on this English nursery rhyme.

However, at that time no one wanted to publish a silly song.  Finally he pitched it to his friend Al Trace, who liked it and performed it with his band the Silly Symphonists.  After this, it was a huge hit for Merry Macs in this 1944 recording.

Remember, leave a comment and you are automatically entered in the Roses to Rainbows Third Anniversary Giveaway.