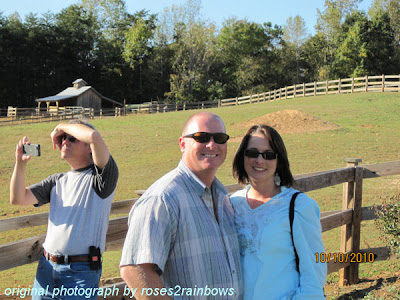 Last Sunday, Kevin and Ashley went wine tasting with us.  It was our first visit to the Divine Llama Vineyard, and it was lots of fun.  The tasting room is the property's original farmhouse.  Before it was restored, it was in such bad condition that the fire department refused to burn it down, so they chose to restore it instead.  The place is gorgeous, with a large front porch overlooking the vineyard.  They share the property with llamas, miniature horses, a miniature burro, several dogs, and cats and some 30 chickens.  Some of their wines are named after their llamas, who are raised as pets, and show animals only. 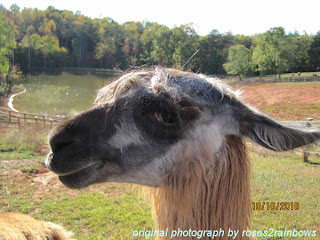 It truly is a farm, with what looked like several acres of some type of beans out back.  From their house, just down the gravel drive, they have a great view of Pilot Mountain from every window.

We tasted their array of wines, and they were all very good.  The last two in the lineup were slightly sweet, and not so much to my liking, but were still good wines. 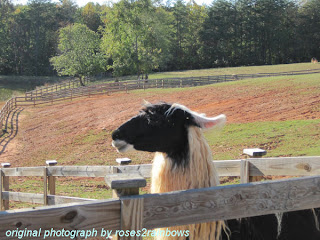 At Divine Llama, they grow Chardonnay, Chardonel, Traminette, Merlot, and Cabernet Franc.  The first three were dry white wines, and my favorites.  The wines in North Carolina have come a long ways since we began tasting them five years ago. 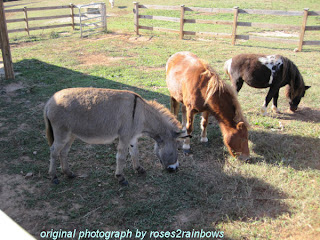 We noticed as we drove in that there were still grapes hanging on the vines, so I asked if they had completed their harvest.  She said they had and the remaining grapes were left for the birds, etc.  The reason being that if they used all the grapes they would have  more wine than they could bottle and sell before the next harvest.  They produce about 12,000 bottles per year.  From my taste experience, I would think that soon they should be able to sell all they could bottle.
Posted by Linda at 12:30 PM