The Secret is in the Seasoning: Herbs and Spices

During the month of October, I will be participating in the Write 31 Days hosted by Crystal Stine. My category is Food, Health & Wellness and my theme is "Into The Kitchen".

Have you ever wondered why a dish from your favorite restaurant tastes so much better than when you make it yourself, or why grandma's soup always made your taste buds shout whereas yours is bland? The secret is in the seasoning!

Why do you think the Colonel's chicken has been around so long and still going strong? It is the secret blend of eleven herbs and spices. That was always a treat when I was a kid.

There are many more herbs and spices than we can explore here, and their uses reach around the globe and back. This is simply an overview of some of the more common ones you may have in your own kitchen and how you can use them.

A herb is a plant whose leaves are used in cooking to add flavor to food, or as a medicine. Herbs may be used fresh or dried, depending on the recipe, but always use fresh in salads, salsas or as a garnish. The flavor of dried herbs is more concentrated, so when using dried herbs, use about 1/3 the amount you would use of fresh herbs. It is helpful to crush them between your fingers to release the essential oils and bring out even more flavor. 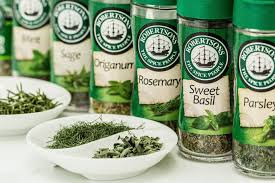 Spices are a flavoring for food made from part of a plant, such as its fruit, seeds, or root, usually dried and often made into a powder. You may purchase spices whole and grate them at home with a grater or spice grinder. 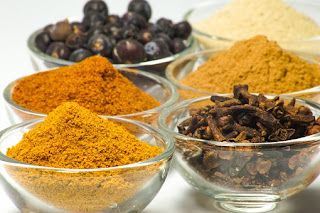 Now look through your pantry and see what inspires you to make some new and exciting dishes.

Do you regularly cook with herbs and spices?
If so, what are some of your favorites?

If you enjoyed this post, please leave a comment. I would love to hear your thoughts.
Posted by Linda at 10:37 PM

Email ThisBlogThis!Share to TwitterShare to FacebookShare to Pinterest
Labels: Food and Wine, Into The Kitchen, Write 31 Days