Written for the 30-day creative writing challenge hosted by Nicky and Mike of We Work For Cheese.  It is Day 23 and the prompt is Stiletto Heels.  Check out the Linky at WWFC to see who's still standing.
In the little town of Shewville lived Spike Stiletto, his wife, Hotstuff and their teenage daughter, Kitten.  They were new in the neighborhood having moved in during the Spring season.  Spike worked at the tannery and Hotstuff modeled during the Fall and Winter seasons while Kitten was in school.  Life is good in Shewville, and they visit occasionally with their neighbors, the Phlats and Lowfers. 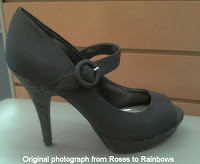 That was until Spike stopped off on his way home from work for a drink at the Golden Spur.  Across the room, pounding on the bar was his cousin, Blade,  from across the tracks.  His tanned face was leathery from working in the sun.

Blade had always been a troublemaker, and there he was dissing Spike's friend Crock, saying that the new house he had built looked like it had been cobbled together out of scraps.

OK, thought Spike, that's enough, getting pumped up.  I'm going to teach that heel a lesson.  Grabbing his beer bottle, he strode toward Blade who barely noticed Spike until they were nearly toe to toe.  Blade, not being the sharpest knife in the drawer, started in on Spike.

"What's this cloak and dagger routine, cousin?" sneered Blade.  "Think just 'cause you're Italian you're better than me?"

"You need to learn to keep your mouth shut, cousin, as he raised his bottle.  Blade ducked just as Spike raised his bottle, successfully blocking the blow, and sending the bottle to the floor, shattering it.  Spike lunged, stepping on the broken glass, slicing his sole.

Undaunted and still wanting to sock it to Blade, he grabbed him by the collar jerking him off his feet.  Blade was by no means a small man, but Spike was a half size bigger, and hauled him, kicking and flailing toward the door.

Spike then turned his cousin around and gave him the boot, sending him face down into the street.  Blade landed unceremoniously at the feet of none other than Sandal, the prettiest girl in town.  She laughed and said "you really stepped in it this time, Blade."